After LeBron’s triple-double last night that put his Cavs (down Love and without Kyrie last night) within 1 game of the NBA finals, I thought it would be as good a time as any to reflect on my incredible level of detestation for LeBron Raymone James.

I’m the first person to admit that my hatred for LeBron James is probably a little irrational and unfair.  It’s in no way an indication of my personal opinion regarding his basketball abilities.  You saw what he did last night, and you can put me on the record:  LeBron is the most talented player in the world right now and when he hangs it up he will go down as one of the all-time greats…he’s THAT good.  He’s an impossible matchup with his size, strength and quickness.  He’s a tremendous passer, very underrated defender and has shown growth in his outside shooting over the years (the only real weakness in his game).  The basketball side will NEVER be my true criticism of LeBron.  He’s a great player and I respect the hell out of his game and how hard he competes on the hardwood.

This issues is:  he’s a total dickhead and every time he opens his mouth I want to leap through the television to punch him in the face.  It all started with “The Decision”…which will go down as the most absurd event EVER covered by ESPN.  Any normal person would just release an announcement through their agent indicating who they’ve agreed to sign with (like every other player has done in NBA history).  Instead, LeBron felt the need to hold a 1-hour special to tell the whole world that he was “taking his talents to South Beach”.  Arguably the six most douchey words ever uttered in sports.

It wasn’t just Cavalier fans and the entire state of Ohio that began their hatred for LeBron on that night (obviously they’ve now forgive him – but we’ll get around to that…) it was the entire country aside from the city of Miami.  As much as I respect his game, that moment marked the instance America lost respect for him as a human being.  He was (and I believe truly is) so egotistical that he felt he deserved that moment.  He had earned the spotlight and attention and boy did he eat that shit up.

Maybe I would have gotten over that eventually, but he just kept piling it on.  Then there was the pep rally.  When the fuck has an NBA team EVER had a pep rally BEFORE they win a championship? WTF is this? High school?  Him, Wade and Bosh sat up on that stage like they were the next hot new boy band and did their whole “not 1, not 2, not 3, not 4, not 5, not 6, not 7” shtick.  As if the world didn’t hate them enough, well everyone rooted against them from that point on.

Now fast forward and Bron Bron is back in Cleveland trying to be the hero and finally bring a championship to the city of Cleveland.  This is the focal point of my actual continued hatred for him, because I could have forgiven him for his bullshit in Miami if it wasn’t for this…I think he’s completely full of shit and putting on a fake front now.  I would have at least respected LeBron if he just came out and admitted that he made a mistake after “The Decision” and accepted the fact that not everyone would love him from that point on.  Instead, he has tried ever since then to make up for it and I think the choice to come back to Cleveland, at its core, was all about Bronnie wanting to feel loved again by his hometown.  I don’t blame him for it, I think that’s actually a natural human feeling.  The issue I have is that when he speaks, he’s spouting out total crap.  This just in LeBron:  not everyone is fooled by your act; I see right through you!

My recommendation:  he should have just embraced the hate for him like Kobe does.  Kobe doesn’t care if people hate him, because he’s going to be himself and never going to censor himself or walk on eggshells.  Me personally, I can’t stand Kobe – I think he’s a selfish player and a total asshole, but at least I respect that he’s honest about it.  I don’t think any of us see the real LeBron on a recurring basis (I think the real him was orchestrating that spectacle in the summer of 2010).  He realized that everyone perceived him as the complete dickhead that he is and was like “damn, I fucked up”.  He tries to put up a good façade, but even that backfired.  In my eyes, he just cemented my perception of him by continually making idiotic and classless comments.  My personal favorite was after they lost to Dallas in the NBA finals:

LeBron on ‘whether it bothers him that so many people are happy to see him fail’:  “Absolutely not. Because at the end of the day, all the people that was rooting on me to fail, at the end of the day they have to wake up tomorrow and have the same life that they had before they woke up today. They have the same personal problems they had today. I’m going to continue to live the way I want to live and continue to do the things that I want to do with me and my family and be happy with that.”

Definitely not the words I would want to hear from a “world-class” athlete and competitor.  Just epitomizes the lack of class he constantly demonstrates.  Never gracious in victory or in defeat, and for that, he’ll never have my respect. At the end of the day, no matter the situation it’s all about LeBron. He may be an all-time great player, in the same class as Magic, Bird and even MJ.  But, he’ll never get that credit from me.  I’ll always consider him that incredibly talented player who acted like a spoiled punk.  Good luck getting a good night’s sleep with my judgment hanging over you LeBron. 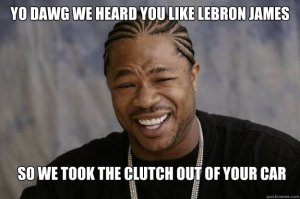